In the first version of the post, in response to the accusation of “anti-science”, the author said that the origin of the post was to see another post, the heart felt and wrote, originally expected to write to sharpen their thinking. But in the process of debating and collecting information, some other ideas slowly emerged. The tragedy of Easter Island is frightening, and the rampant technological gimmicks make me feel the need to remind the public that progress is not as easy as one might think! Making the status quo clear, setting the right mindset and sorting out the system are the necessary preparations to face the next technological step.

According to archaeological, genetic, linguistic and folklore studies, the inhabitants of Easter Island are Polynesians from the Pacific Ocean, and this has been recognized by the academic community. The Polynesians were born seafaring people and were able to cross large areas of water by relying on primitive navigation techniques. Due to some unknowable factors and luck (random perturbations??) , a small group of people came to Easter Island. After this point, contact with the outside world was lost, and it became a nearly totally isolated system.

Historically, Easter Island was a productive and wooded island. Scientists have proven through spore pollen tests that Chilean wine pines, 20 meters tall and 1 meter in diameter, once existed on Easter Island. In fact, until the early days of human settlement, Easter Island was a temperate forest covered with tall trees and lush shrubs.

The abundance of resources allowed the island’s original inhabitants to feed and clothe themselves without working, so the population began to swell. Later, the islanders began to make huge stone statues, and the population expansion caused a great deal of damage to the resources, especially the trees that had to be cut down to make the statues, which began to disappear. Radiocarbon dating of samples from hearths and garbage dumps by scientists showed that firewood had been replaced by herbs around 1640, even in the chief’s house. 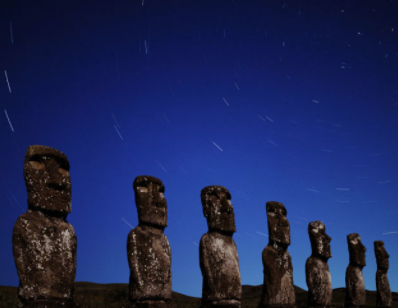 Archaeological studies show that dolphins were once the main food of the islanders, but by about 1500, dolphin bones could no longer be found in the islanders' garbage, simply because the trees had been cut down and there was no more wood to make large boats to catch dolphins at sea.

Without boats made of giant wood, the survivors could not sail far to fish and hunt, and they began to turn to a food source they had never used before: humans themselves. Human skeletons are found throughout the ruins of late Easter Island waste piles, some bones cracked to extract marrow. The oral history of the islanders is still replete with tales of cannibalism, and there is no more offensive insult to the enemy than, “Your mother’s flesh is in my teeth.”

By around 1700, the island had only about 2,000 inhabitants due to war and starvation. But fortunately, after nearly a thousand years of isolation, the Dutch explorer Jacob Garrowen came to Easter Island in 1722, bringing it back into contact with the outside world (though with it came disease and slavery). But he then discovered that the island, which would later be named “Easter,” was a wasteland, with not a single tree to be found, and bushes and weeds no more than 3 meters high.

Some might say Easter Island was too small and doomed to die. The Earth looks big, but on a cosmic scale, it may not be as big as Easter Island. An academician commented: “Easter Island is an isolated island in the Pacific Ocean, and our Earth is also a lonely being in a long universe. So Easter Island is a microcosm of the Earth.”

Some random perturbation in the 18th century started Earth civilization into an industrial society, with a rapidly expanding population and a dramatic increase in energy and resource consumption. The inhabitants of Easter Island eventually cut down all the timber and could not afford to build large ships to go fishing at sea, much less sail to other islands and continents, and were consequently trapped alive on a tiny island. Human industrial civilization is consuming the earth’s resources at an unprecedented rate, and if it cannot make a major breakthrough in acquiring new levels of negative entropy flow before the critical point of resource and energy depletion arrives (for example, if it can still afford to develop and deploy controlled nuclear fusion systems), it is very likely to be trapped forever on a small rock next to the sun.

If so, for the universe, all human sorrows and ambitions have no meaning and are destined to go up in smoke.