There are many explanations for Fermi’s paradox. One of the more popular views is that humans overestimate their own observation capabilities.

Why can’t the traces of alien civilization be observed? Because humans are too weak. Many people think that human science and technology civilization is only about 300 years old, and it takes decades to have a slightly better observation ability. The universe is so big, it is normal that no traces can be observed in such a short period of time. After all, human civilization can initially reach beyond the atmosphere, and the available observation methods may be extremely primitive at the cosmic level.

But think about it conversely, humans may not find aliens because of limited means, but why did aliens not find humans? In other words, why did the aliens not destroy the human beings on Earth?

At present, the earliest civilization of the earth is recognized as the Sumerian civilization in the Mesopotamia, which has a history of about 5,000 years. If there are a large number of civilizations that can navigate freely between stars, their observation methods should far exceed the current level of human technology. In the 5000-year history of letters, why are there no records of visits by aliens or shape probes? Humans can despise the technical level of the ancients, but they cannot underestimate the wisdom of the ancients. Ancient civilizations only have limited accumulation of technology, and the brains and thinking abilities of ancients are not worse than moderns. So far, human history has not left a record of following rational rules, indicating the existence of extraterrestrial civilization.

Some netizens blamed this on the “Zoo Conservation Project” (the earth was set as a zoo by aliens). To think that all alien civilizations can follow the same rules is just wishful thinking.

Another popular explanation for Fermi’s paradox is that there are few planets where civilization can exist.

American astronomer Frank Drake (Frank Drake) put forward a formula in the 1960s in the town of Green Bank, used to predict “the number of intelligent civilizations in and outside the galaxy that may come into contact with us.” Drake formula

For a long time, many scholars believed that the earth is a special existence, and an existence like the earth may be unique in the universe. In other words, after the first few terms of the Drake equation are multiplied, the value is negligibly small. But recent advances in astronomy have dealt a fatal blow to this view. 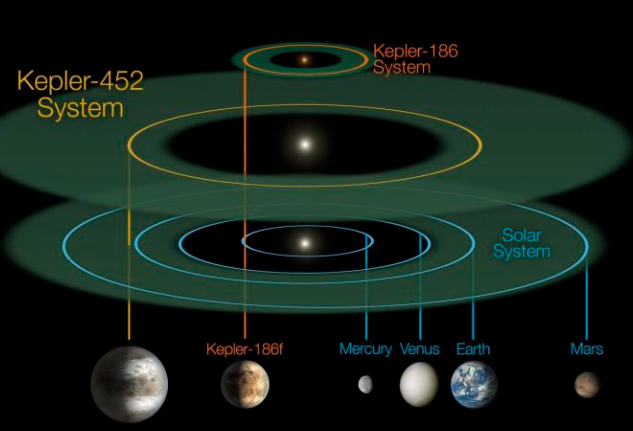 At 0:00 AM on July 24, 2015, Beijing time, NASA announced a news that astronomers confirmed the discovery of the first planet outside the solar system in the “habitable zone” with the closest volume to the Earth (code-named “Kepler-452b” ), this is an important milestone for mankind in the search for a “second earth” outside the solar system. The discovery of “Kepler-452b” increased the number of confirmed exoplanets to 1,030.

Astronomers said that the name of the exoplanet found to be closest to “the other earth” is Kepler-452b, and the similarity index with the earth is 0.98. This is the “twin planet” closest to the Earth discovered so far, and it may have an atmosphere and flowing water. There is currently no evidence to prove that there is life on Kepler 452b, because the Kepler telescope is only responsible for taking pictures and there is no way to observe the planets at close range. This requires later technical means to follow up, and the tool may need to be sent into orbit.

First of all, let me explain that the telescope that discovered this thing is called Kepler. It uses the “transcendence method” to search for exoplanets. After launching in 2009, it found thousands of exoplanets, almost increasing the number of known exoplanets. By an order of magnitude. It must be pointed out that the “transcendence method” can only search for a very small part of the universe. The eclipse method can only find the small part of the planet’s orbital plane facing the earth, and there is still a lot of light intensity for the stars. Demanding requirements. But in such a small area, in such a short period of time (the Kepler telescope has only worked for a few years, it takes time to determine a planet by the eclipse method), not far from the earth (considering the cosmic scale) Within the distance, a large number of planets were discovered, many of which are in similar environments to the Earth (except for the Kepler-452b mentioned above, and Kepler-186F, etc.).

It is reasonable to speculate that if the time is a little longer, or in an area that cannot be observed by the eclipse method (hundreds to thousands of times the observable area), the number of potentially suitable planets will be an astronomical number.

The particularity of the earth continues to decline.

The third scenario that makes people think about it, where is the alien probe?

If the principle of capital exists in all civilizations and manned navigation is economically difficult, then the cost of unmanned detection instruments should be very low. Human manned navigation can only reach a mere 380,000 kilometers away, but Voyager 1 has reached 20 billion kilometers outside the earth. In just a few decades, humans have launched many detectors back and forth.

First, I state some basic views on the civilization of the universe:

Some people may say that the earth’s orbit is close to 10% or 10% far away from the sun, and humans will be extinct, so human civilization is very special. But I personally believe that the current human body structure cannot be used to think that the body structure of other intelligent creatures should be similar to that of humans. Under the harsh conditions considered by other races, the intelligent species evolved should be adapted to their environment, and they may in turn think that the earth is harsh.

2 The cognitive ability of intelligent creatures should be able to easily distinguish between natural and artificial.

Anyone with a normal mind (even an uncivilized primitive person or a person who has never seen modern civilization) is walking in the primitive deep forest, and suddenly picks up a watch and sees the pointer turning regularly, he must know that this piece Watches are not born, not constructed by nature, but must be created by some wise man. Similarly, humans can easily distinguish the creations of other intelligent civilizations, and other intelligent civilizations can definitely judge that the creations launched by humans are not innate.

3 Any civilization has a desire to explore.

The extraterrestrial intelligent life may have been destroyed for its own reasons. These reasons may include nuclear war, bioterrorism, or the reverse elimination of civilization. But even so, some of their technical achievements should be preserved. This is not science fiction, but reality. In fact, we humans have already done this: even if humanity as a species is completely extinct one day, we will still have at least five artificial detection devices wandering outside the galaxy, telling the story of human civilization.

Human civilization will certainly continue to launch probes into the universe in the future, and the number will not be small.

As long as the astronomical stars and astronomical civilizations of the universe can evolve to a level higher than the current level of human technology, the launch cost will be greatly reduced, and the number of detectors launched will fill the universe.

Why didn’t the alien civilization see a trace?