This section attempts to use mathematical knowledge to explain the changing trend of complexity.

It can be seen from history that in the case of low complexity, a slight technological improvement will bring shocking effects to the society. In today’s high complexity, technology is beginning to encounter negative feedback from society, and the effect of improvement is diminishing. On the other hand, social resources are limited. Those in power always pay attention to social stability, and the share of R&D investment is limited.

The complexity is represented by the variable C. A large C value represents a high level of social technology. K represents the social tolerance or the maximum resource input ratio. Then, the differential equation of complexity evolving with time t can be expressed as follows:

If dC/dt=q can be achieved, then the complexity will grow linearly from the beginning, and it will never end, which does not conform to human observation facts.

Based on the previous sections, we can see that the changes in complexity have the following characteristics:

Taking into account the above characteristics, although the specific expressions of g and f cannot be accurately obtained, if only the trend is observed, it can be simplified as follows:

Among them, a, b, k, d are proportional coefficients, and the value is generally positive. a*C*exp(-b*t) represents the positive feedback term, which rises at the initial stage, but decays quickly; k*(1-C/(C+d)) represents the proportion of social resource input in the middle and late stages (C is very small When it is almost constant k), the larger the C, the smaller the proportion, and k is the maximum investment proportion that the society can tolerate.

Well, take a=5, b=1, d=5, and simulate this equation with Matlab, the approximate curve obtained is as follows: 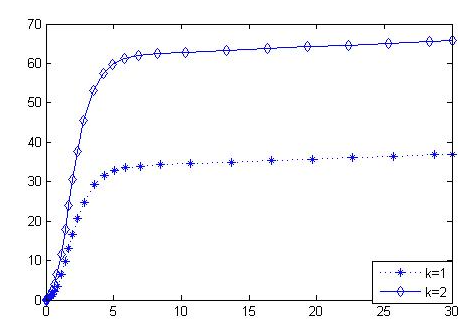 Again, the derivation of the above model is very rough. The expressions of f and g can be in other forms, and a, b, k, and d can be other values. However, this article only expresses personal opinions and expresses trends, and does not force public approval.

If you want to increase the ceiling, the best way is to increase k, which is social tolerance. For example, during the world war, the key to rapid technological advancement is that during the war, various governments faced life and death challenges and went all out. All social resources were used for weapon research and development. When people’s livelihood was put to the end, the value of k was greatly increased.

The achievements of World War II included materials technology, electronic computers, radar, nuclear technology, jet aircraft and rocket technology. To this day, mankind has not broken away from the technological path opened up by World War II.

However, the improvement of k value is limited. In extreme cases, all the resources of the whole society are used for scientific research and development. In peacetime, this is an unimaginable scenario. And in today’s society where nuclear weapons are predominant, it is impossible to imagine a world war breaking out on the earth.