Over the past 40 years, Moore’s Law in the field of semiconductor technology has brought profound changes to the world. For most countries, a large number of people are immersed in the bit world at all times. In this “non-entropy” world, everyone seems to be the king, as long as they are willing to pay money, they can do everything in the bit world. However, in stark contrast to the prosperity of the bit world in the past 40 years, the real world has halted in many areas, and even regressed in some areas. The most typical is space propulsion technology. According to a senior NASA engineer, the United States has no ability (not money) to build a giant of the Saturn V rocket. 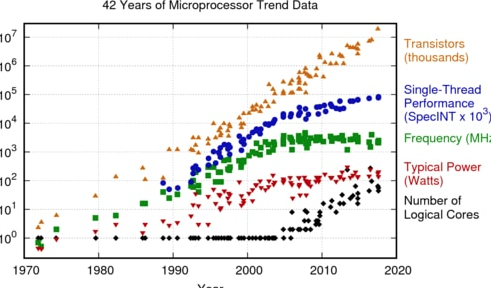 Compared with the frustration of the real world, the supporters of Bit World are full of confidence. The ultimate optimist of IT technology is Ray Kurzweil and his singularity theory. He believes that mankind is approaching a moment when artificial intelligence surpasses the human brain, when humanity (body, mind, civilization) will undergo a complete and irreversible change. He believes that this moment is not only inevitable, but also imminent. According to his calculations, the end of pure human civilization (“human pure civilization”) is in 2045. This theory has been supported by many people.

It seems that a wonderful world is about to unfold.

Regardless of Kurzweil’s position (he is the vice president of Google, the giant of the bit world), reading his masterpiece carefully, it seems to feel a strong MLM taste, slogan, slogan, or slogan! How to realize artificial intelligence? The author’s words are unclear, but it will come true when he speaks. If you really go deep into IT technology, you will understand that all breakthroughs in the IT world are “simulation”. According to the famous Silicon Valley investor Peter Thiel, Bitworld rearranges the virtual mapping of things that already exist or will never exist. Don’t count on IT technology for things that human brains can’t think of. Not to mention, the real world is an entropy-increasing world, and the bit world cannot bring real entropy reduction.

**Suppose you need to choose between A option and B option: A option is reserved ****2002 Electronic technology before **, including Google, Amazon, and Wikipedia, can use tap water and flush toilets, but not ** any new things invented after 2002. B option is to keep anything invented in the past 10 years, such as Facebook, Twitter website And iPad tablet computer, etc., but you cannot use tap water and flush toilets. You must carry water into the room by yourself and take out the waste water, even at 3 in the early morning of rainy night, You can only walk through the wet muddy road to go to the toilet outside. Which option would you choose? **

The choice of most people is definite, because human beings live in the real world.

Even considering the hustle and bustle of the bit world, we must point out a fact: IT technology has developed to this stage, it is difficult to continue in depth, and the marginal utility has begun to diminish. Nobel Prize winner Paul Krugman wrote in the New York Times on May 25, 2015: Don’t overestimate the impact of the technological revolution. The digital age that has lasted for 40 years is disappointing. New technologies bring It made many headlines, but its economic achievements are average. Krugman wrote: “Douglas Adams said at the beginning of the 1979 science fiction novel “The Hitchhiking Guide to the Galaxy” that life on earth is too primitive, and that electronic watches are a very clever idea. But that was an information technology revolution. We have made great progress since then, but the major technological innovation in 2015 was an electronic watch, but this electronic watch will tell you to stand up after you sit for too long.”

The relationship between the part and the whole is a common question in philosophy, and whether the part constitutes the whole or the whole generates the part is an old topic that has been debated for hundreds of years. After hundreds of years of development, the technology of mankind today is divided into categories, machinery, power, electronics, chemical industry, aviation and so on. Of course, each category can be subdivided. For example, electronic technology can be divided into low frequency and high frequency, digital and analog according to different classification standards. If the different technology categories are integrated and related, a large number of composite technologies, such as mechatronics, can also be produced.

The numerous technical categories dazzled most laymen. Even experts in a certain field have very little understanding of other related technical fields in many cases, not to mention the phenomenon of “interlacing like mountains”. A capable person of machinery is usually afraid to evaluate genetic engineering technology. Under the influence of this kind of psychology, various scientific and technological interest sub-groups have exaggerated their progress in their fields, because they are basically risk-free. All these combined forces give people the impression that news reports have made technological progress every day, and our era is an era of “technological explosion”.

First of all, it should be pointed out that technology advancements in certain sub-fields are just commercial application promotion, not real technological advancements. The most typical is the car GPS navigation system. Before GPS was introduced into cars, every driver had to prepare a thick stack of traffic maps. Except for long-distance drivers, ordinary private car owners were restricted to a small area. After the introduction of GPS navigation, the field of automobile activity has been expanded. For private car owners, this is a remarkable technological advancement. But GPS navigation technology matured very early. Before automobiles, airplanes and large ships were equipped with GPS, and its GPS subsystem was even more difficult to implement than automobiles. In the process of migrating to cars, GPS navigation technology itself did not make a big breakthrough.

Secondly, **Technological breakthroughs in many sub-fields are essentially “replacement type” rather than “pioneering type”. **For example, technological breakthroughs in airplanes have greatly expanded the space/travel speed of human activities. The replacement of CD players by mp3 is only a substitute for digital media, and mp3 does not endow humans with new capabilities. Alternative technological innovations can easily lead to zero-sum games, while pioneering innovations can often lead to a win-win situation. Today, many so-called technological innovations have been clamoring fiercely, but in the end the response has been mediocre. This is the reason.

From the perspective of human nature, it is easy to fall into subjective validation. When you encounter a proposition, you will agree with it because of your beliefs and position. For example, a Federer fan will firmly support “Federer is better than Nadal”, and even when Federer loses to Nadal, he will hold the view that “Federer is definitely better than Nadal at his peak”. A mobile phone software developer sent several private messages to me, questioning why there was “the stagnation of technological progress.” Unlike most netizens, he exemplified the advancement of technology in his field, how the clock speed and kernel doubled in just ten years. Obviously, the changes in his field are indeed rapid, which gives him strong confidence. But the problem is that, as far as human beings are concerned, the mobile phone field is only a small branch of many technical fields. The revolutionary progress in the mobile phone field is reflected in the whole, and the progress that may be brought is not very large. The smart phone is simply a miniaturized computer and cannot accomplish some unique tasks. It can be imagined that if human beings do not have mobile phones, would they not be able to exploit oil and land on the moon in space? Throughout history, there are many such examples, such as barcodes, containers, and CT.

Technological advances in many sub-fields may be revolutionary innovations in their own fields, but most of the sub-fields provide relatively small contributions to humanity as a whole, and the earth-shaking changes in one field may only be A small spray on the whole. For example, compared to traditional long-distance calls, IP telephony is a revolutionary breakthrough. But for human society as a whole, the original telephone system has been able to meet more than 95% of the truly valuable information exchange, and the new IP telephone system is more to meet the needs of edge information exchange. Therefore, even if IP telephony advocates have repeatedly emphasized its importance, the real efficiency improvement that human society can obtain from it is minimal. But on the other hand, this kind of advocacy gives the public the impression that technological revolution is everywhere!

2.1 Rendering and brainwashing
2.2 Papers and patents: the absurdity behind astronomical numbers